Jules, Diane and Jayson were all in attendance.

We started with Diane’s homework from her previous session:

She’s been working to a final draft of her dissertation this coming Sunday.

I N N E R  O T H E R is the title of the show that’s she’s been working on  as a curator. The image is a macro shot of an Indian squash:

The above image for the show is the style that she wants to follow for her final show at Goldsmiths. She’s interested in making it using p5.js – and using screens in a portrait format. I commented that this changes them into portals. She’s thinking about what colours she’s going to use and getting to an Alien look. I said it was fine to use animated gifs in her p5.js code – being pragmatic with her programming is fine. We talked about how the special effects team on Stargate ended up using a side shot of a stirred bucked of water: 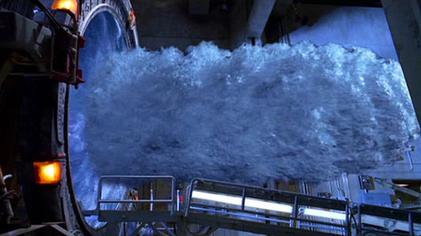 We then discussed the narrative of her show – what new things does she have to make?

Think about the narrative of the show – what does she need to make? Diane referenced the capacitive sensing technology she used in her previous Cross Talk project. She discussed using capacitance to sense a touch and using that touch to create a generative visual – distorting the screen – even using a VGA cable to display the image generated when you play a sound through it. – Making a reference to the idea of collaboration between human and bacteria being perceived as similarly “wrong”.

I suggested using a triptych of three 16:9 forms – lots of art history around the triptych – the human, the bacterial, the blend or thesis, antithesis and synthesis.  Is the synthesis the visualisation of sound? The simulation aspects of the research she’s doing are referred to as “in silico” instead of “in vitro”. She’s considering casting silicon for the final show.

We then moved onto a discussion of what scenarios she wants to explore in the final show. She hasn’t factored in the previously discussed DNA encoding into her dissertation. She referenced the recent story about Madonna blocking the sale of her hairbrush because of concerns about her DNA being extracted. I suggested a show structure of:

She’s been looking at plinths to display things on, I said think about three minutes of time at each station, a three minute loop at each.

We discussed the display of three objects:

I referenced the IDEO business card project from 2001 – a deep dive into thinking about person identity in the future that resulted in a series of speculative designs in the form of business cards. I also suggested that she think about narrating some or all of the show.

Next was Jayson’s homework from the previous session:

He got all the Ikea objects! Two Vittsjö’s and two Vittsjö desk parks too. He’s assembled them without the letter draw in each case. The tables are pretty long and narrow – he’s been experimenting with vinyl cutting to make text too. Ikea have stopped making them so he’s had to shop around.

In terms of the final kit list, he’s decided to use his own screens to fit into the book cases – it’s easier than using college stock, which is limited as it has to be shared between all students. The list is currently as follows:

He’s given up on captive portal on the Crystal Wifi (proper name for splash screen) which are generally built into routers. Instead hee’s made a little Processing server to serve up pages, he thinks it should work. I suggested that he’ll have to make a DNS server to do it properly. I also suggested  a plan b of a browser set up that crystallises content, we found the following links together:

He’s continued working a crystalisation timeline and map – he demonstrated a crystal map in Processing. He’s currently working on an animation or slideshow using the narrative we discussed previously.

I suggested the idea of using a series of fake news broadcasts, referencing the above title sequence for Romeo and Juliet from 1996. I also referenced two recent shorts from Neil Blokamp’s Oats Studios:

He decided not to add sound to the experience or selfies – he thinks the space is going to be dense enough already. We finished by discussing possible things for the audience to take away – we decided that crystals were too poisonous, but business cards from the future might be interesting.

We finished by going through Jules’ homework:

We started by looking at the swipe interaction and re-factored her code. I suggested using the Magic Trackpad from Apple instead of messing around with a separate Android tablet and having to connect that to another device.